For the last few months, National Gallery of Victoria (NGV) had been running their first Triennial. The NGV Triennial is a celebration of arts for a city that thrive from being the culture capital of Australia. There are both local and international artists involved within the Triennial. The Triennial also showcase variety of artistic expressions, from traditional sculptures to the very modern digital art form of virtual reality experience. As you can tell, there’s something in this for everyone. The most popular, perhaps most photographed artwork in the exhibition, in my opinion will be the following by Ron Mueck called, “Mass”,

Giant skulls piled on top of one another in such a chaotic fashion, it made you feel like you were walking into Giants mass graves. The idea of the piece, for the artist himself, is an artistic commentary on the mass killings throughout the history of civilisation. The artist made a specific reference to event such as the Cambodian genocide under the Khmer Rouge regime, or the Holocaust of the Jews in the hands of Nazi party.

The skulls are large in scale to evoke a specific emotion for us the viewers. The installation catch me by surprise, it is confronting and not the sort of view that I’m used to. For me at least, it felt like walking into a room confronting my own mortality. Death isn’t something any human can avoid, it is a definite final stop in our journey called life. Hence, the confrontational affect this work had over me felt like an eerie reminder. 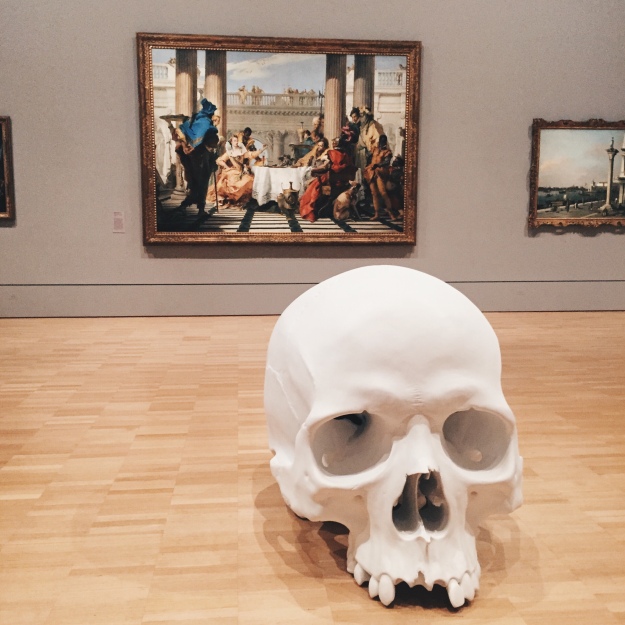 Despite the grim first impression of this work, there’s a sense of beauty that brings you in. Perhaps, it was the brilliant placements of the artwork. The skulls were located within the Gallery’s 19th Century paintings. It was almost deliberate for the artist to point out, look at all the great legacy of beautiful paintings left by Great Masters. Can you appreciate the beauty of the Old Masters painting through the legacy of terror our generation seems to left behind?

However way these giant skulls installations affect you, the genuine narrative Mueck’s tried to convey through his artwork is honest and confronting for a reason. If you live in Melbourne, I hope you get a chance to see it at the NGV, highly recommended for you to just experience it in person.

2 thoughts on ““Mass” by Ron Mueck for NGV Melbourne Triennial”

In today's edition of #oneemptyonenewbie 😄 woohoo... love doing empty post, feels like an achievement of its own kind 😂
Always love their Superfood Moisture Cream, I went through 2 bottles to be exact, but I am so happy that @youthtothepeople team contacted me and generously allowing me to try more of their products ❤
Finally hereee...
Today I stumbled upon these words,
Loading Comments...
Comment
×
%d bloggers like this: